Located 25 minutes drive north west of Concord, Andover includes the villages of East Andover, West Andover, Cilleyville, and Potter Place, named for Richard Potter, an African-American illusionist who lived there in the early 1800s. Settled in 1761, the town was originally named "New Breton," having been granted primarily to soldiers who had taken part in the 1745 capture of Cape Breton during hostilities with the French in Canada. Among those soldiers was their regimental surgeon, Dr. Anthony Emery, a friend of Samuel Phillips, Jr., who in 1778 founded the Phillips Andover Academy in Andover, Massachusetts. "New Breton" would be incorporated as "Andover" in 1779, the year Phillips Andover was completed. In 1822, an academy was established in Andover, although it would close in 1828. Another school was founded in 1848 that would become Proctor Academy, the prestigious institution around which the town's economy is based. Andover is noted for its antique shops, Greek Revival architecture, and two covered bridges. Potter Place Railroad Station, built in 1874 by the Northern Railroad, is listed on the National Register of Historic Places, and today serves as a museum for the Andover Historical Society. The town of Andover enjoys Highland Lake, with a town beach, Bradley Lake and the Blackwater River. 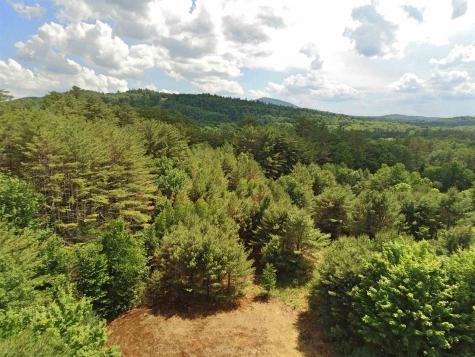 Surrounded by pastures and trails, and a short walk to Proctor Academy, this 6 acre parcel in Andover's village district could be the site of your new dream home. There is direct access to the Northern Rail Trail from the back of the property where you'll find a small pond. Proctor Ski area, with its enhanced nordic ski trails, mountain bike course, and USSA/FIS approved trails, is a short walk from the year-round maintained trail. The quaint Andover town village and Proctor Academy's pristine campus make this a wonderful spot for your new home. 3 bedroom, 2 bath manufactured home situated on an beautiful 4.7 acre lot. The home offers plenty of space with a nicely laid out kitchen that offers a ton of cabinetry for ample storage. The breakfast bar overlooks the dining area with a slider that leads out to the back deck and amazing view. A Nice open living room awaits and has a connecting sunroom that would make for an amazing office if needed. There is a small screened in porch off the living area with enough space for a few chairs to sit and sip your morning cup of coffee. The master bedroom has a private and spacious bathroom. There are two additional bedrooms and a 3/4 bathroom with a shower. Outside you will find a nice 2 car detached garage and paved driveway, and an additional shed for storage. Wide open and usable level land to garden and play. The carpets will need some replacement and the garage roof will need some attention soon but for the price this location cant be beat. Come take a look and make this home your own! Showings to begin Saturday April 3rd. 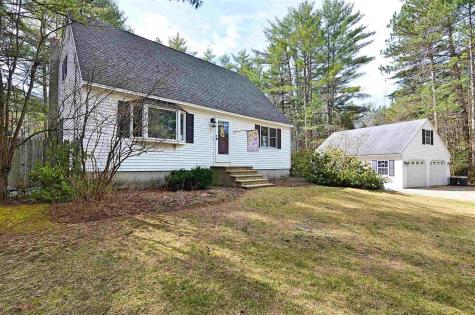 Charming cape on a dead end road for sale for the first time. This 3 bedroom, one and a half bathroom home will check all of your boxes. There is a 2-car garage, backyard deck and patio, hot tub, animal barn, and pellet stove. The property is private, quiet, and full of fun with direct access to snowmobile trails! Watch as the gardens bloom this spring! Inside you'll find a beautifully refinished kitchen with quartz countertops and hardwood floors. The first floor laundry room is conveniently adjacent to the mudroom and there are two living rooms/dens, one with a pellet stove. The three bedrooms upstairs offer plenty of space with the full dormer and the master bedroom is super spacious with a walk-in closet. There is a full basement where they have an additional wood-stove for those cold New England winter days. Delayed showings until the open house Saturday April 10th from 9:00 - 2:00. Please call to reserve a spot.

Lovely 4 bedroom 2 bath home on a dead end street. Features gleaming hardwood floors, Chefs kitchen with stainless steel appliances and granite counter tops. open concept kitchen/dining, spacious living room and first floor master suite. The other 3 bedrooms are on the second floor along with a second bath. Great space in the lower level walkout that can be finished. There is a second building being used as a shop and a 2 bedroom rental apartment upstairs that is rented out for $875 a month. 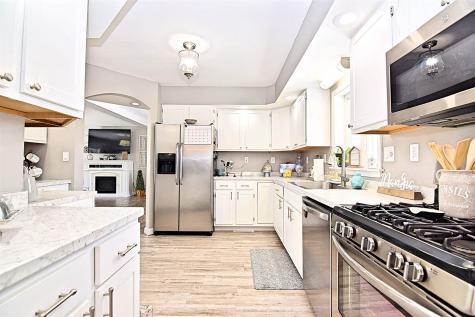 This captivating two level ranch home is bursting with charm and character. Each square foot of this incredibly spacious house has been distinctively designed and radiates luxury. The large rooms are bright and lively. The stunning kitchen is loaded with counter space and new stainless steel appliances and offers two separate formal dining spaces. The living room, with its custom trim work and views of the peak of Kearsarge Mountain, feels grand and radiant. A chic master bedroom is complete with a walk-in closet and a beautiful en suite with a custom shower and soaking tub. The main level has two additional bedrooms that are of perfect size, each with great closet space. More elegant living space occupies the (walk out) lower level with an office, extra bedroom, 3/4 bath, and a large play room, guest quarters or in-law suite equipped with a kitchenette. The oversized two bay detached garage (24x36) has even more stylishly finished space which has been used as a game room, home gym and office. Updates include a new furnace with central AC, new Rinnai direct vent heaters and the leach field was installed in 2016. Furthermore, the laundry is conveniently located on the main floor entryway. Andover is a wonderful community located 30 minutes to Concord and 1.5 hours to Boston. Come make yourself at home in this spacious and stately ranch! Delayed showings until an open house Sunday 2/28 from 10:00 - 1:00. 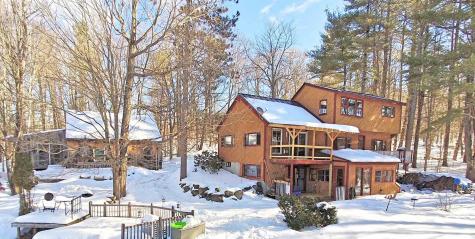 Nestled into the trees on a beautiful 6 acre lot is this spacious contemporary cape with views of the surrounding mountains. Built with love, you'll find a custom kitchen with hickory cabinets and new stainless steel appliances as you enter. The ambiance transforms from the original post and beam style into the newly remodeled dining and living room with bright windows and a sliding door onto a scenic, covered deck. The two bedrooms on the main floor have new carpet, paint, and lots of sunlight. The second floor master bedroom and craft room have an en-suite bathroom with a claw foot tub and stunning views of Mount Kearsarge. A wonderfully finished basement is perfect for cozying up next to the wood stove and provides a great space for a home office with its own bathroom as well as a freshly finished laundry room. You will love the additional room where you can walk out the large sliding doors to a back yard designed for fun. A perfect sledding hill awaits for winter months and when the snow melts, the outdoor pool has a separate deck and gazebo. Additionally, a separate back entrance brings you to an auxiliary living space/in-law apartment with one bedroom, a kitchenette and a full bathroom. Come check out this wonderful Andover home on the market for the first time! Delayed showings until the open house Saturday 2/27 from 10:00 - 1:00. 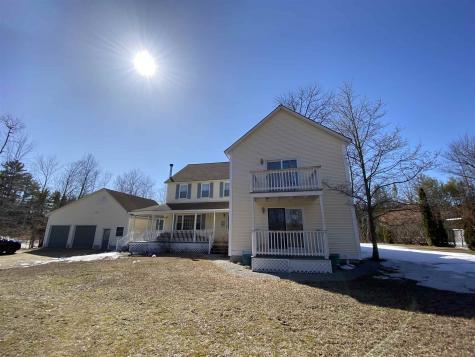 81 Agony Hill Rd, Andover. This oversized colonial offers a ton of space to roam-both inside and out! Located on a very private 5 acre parcel, this +/- 3180 sq. ft home with attached 2 car garage is sure to please. Enter from the oversized garage into the heated workshop and 2 additional workspaces, and you'll find a large, cabinet-lined kitchen with breakfast bar and open-concept dining room with slider access to the expansive back deck and above-ground pool. Follow through to the living room that features a wood stove as supplemental heat (for those chilly New England spring nights), and down the hall to the half bath and laundry room. The first floor master suite offers 2 levels of living space that include small decks on both first and second floor, a private hot tub room on the second level, as well as a walk-in closet and 3/4 private ensuite bath. Head upstairs in the other wing, and you'll find 3 generously-sized bedrooms with large closets, a small study or library and another full bathroom. Couple all of this with a partially finished basement room (pool table stays!) and a great yard with extensive space for gardening and outdoor pursuits, and you'll see that this really is a fantastic home waiting for a new family-could it be yours? Delayed showings to start Saturday, 3/27. 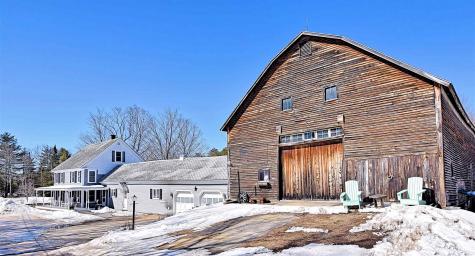 A unique and charismatic Andover home is ready for its next owners! Previously a bed and breakfast, this c. 1913 colonial with a beautiful New England style barn has six bedrooms each with their own en-suite bathrooms. This home will not intimidate though as it has been successfully retrofitted to accommodate residential life. However, it could easily be converted back as an income producing property (pending town approval). An attached two bedroom and one bathroom apartment is a great bonus dwelling and the newly added dormers offer plenty of living space. The attached barn is extraordinary. You must see it for yourself! The fenced, in-ground pool is fully operational with a 4 year old liner and is perfect for the hot NH summertime. Delayed showings until an open house Sunday, March 21st from 10:00 - 2:00. Please call to reserve a time.

Andover, NHDepot (AKA US Route 4) Street

They don't make them like this any more: major road frontage, usable river frontage on gentle stream, level well-drained land, easy access to the rail trail, easy to get to from anywhere. The possibilities are endless: subdivision, family compound, farm, or orchard, or specialized campground, or separate lots with shared river access, or what can you envision. Sandy well-drained soils make roads and septic easy. Two things to be aware of: Buyer will be responsible for any current use penalties assessed and property is in the FA District, which means a special exception is required for residential use. It becomes a challenge to find the best use for a prime piece of property. 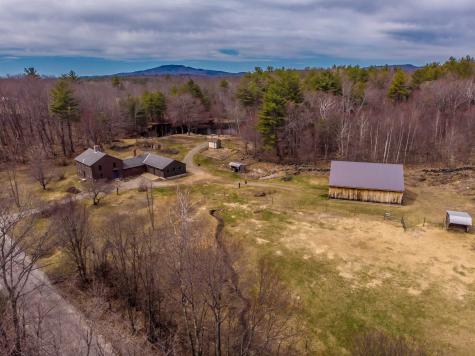 LEDGEWOOD FARM in central NH has something for everyone! The 1800s colonial is warm and inviting, offering spacious rooms with natural light, wide plank flooring, and vintage detail. On the first level a large kitchen with fireplace opens to a cozy dining room and family sized living room with its own fireplace. A first floor half bath/laundry room and two more rooms with potential for multiple uses completes the layout. Three bedrooms and a just redone full bath are up on the second floor. In the basement a newer furnace, pressure tank, and hot water tank have been added. A heat exchanger in the attic heats the second floor and cools the whole house in the summer. Outside 116 acres is yours to explore. A year round pond waits in the backyard, ready for early morning breakfasts or twilight glasses of wine. The 50'x38' barn is ready for livestock, storage or a handy workshop. Over 2 acres are fenced, used previously for sheep and horses. Thinking of chickens? The coop is ready. Skiing is just down the road as is access to the Northern Rail Trail for miles of riding, biking or hiking pleasure. Just a half hour to Concord and under an hour to Manchester. Showings start Saturday the 10th at 10 AM. Appointment required.

Listed by Terry Calder of Farms & Barns RE, LLC