Situated in a hilly, rocky, forested area, and with 26 lakes and ponds, Washington is a picturesque resort area. It is home to Pillsbury State Park. Ashuelot Pond is in the southwest, and part of Highland Lake is in the south. Lovewell Mountain, elevation 2,496 feet (761 m) above sea level, is the highest point in town. The Washington Town Common, elevation 1,507 feet (459 m), is the highest town center in the state. Washington is bordered by Goshen to the northwest, Newbury and Bradford to the northeast, Hillsborough and Windsor to the southeast, Stoddard to the south, Marlow to the southwest, and Lempster to the west.

Granted in 1735 by Colonial Governor Jonathan Belcher of Massachusetts, the town was one of the fort towns designated to protect the colonies from Indian attack, named "Monadnock Number 8". In 1751, the town was granted by Governor Benning Wentworth as "New Concord". As the grant was never settled, the charter was revoked. Reuben Kidder of New Ipswich acquired the grant, naming it "Camden". The first settlers arrived in 1768 and built log houses. By 1773, the community had 132 inhabitants. On December 13, 1776, the newly established American revolutionary government incorporated the town as "Washington", after George Washington — the first named in his honor.

By 1830, the population had grown to 1,135. Using water power from the streams, mills manufactured lumber, barrel staves, shingles, chair parts, bobbins, whip sockets, hosiery, bricks and washboards. Gristmills ground grain. Sheep farms, producing wool and mutton, were an important business. In 1840, there were 200 farms. Tubbs Union Academy was founded in 1849, and although it did not last long, the school once enrolled over 100 students from New Hampshire and beyond. The first Seventh-day Adventist church was established in Washington in 1862. In 1886, the town produced 53 tons of maple sugar.

The railroad era brought tourists, and hotels were built on the lakes and ponds; however, with 19th century migration to the Midwest, the town's population dwindled. As of 1960, it contained only 162 inhabitants. Washington has grown since, as its scenic beauty attracts tourists and retirees. The town contains significant examples of early architecture, including the Town Hall, built as a meetinghouse in 1787, the Congregational Church built in 1840, and the first Seventh-day Adventist Church built circa 1843. 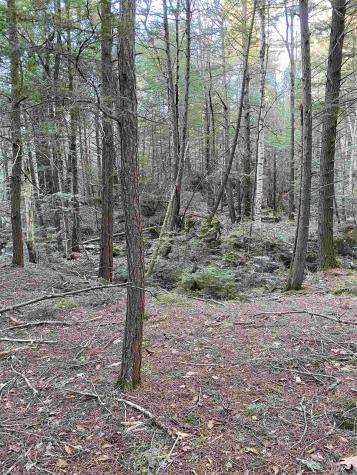 Have you always wanted to own NH granite? Well here is your chance, this lot has chunks of NH granite. Front section of the lot would make a nice building site, use your imagination to maximize the potential of this lot. Bonus is that by owning this lot, you could access Island Pond, the beach & boat ramp. Association is voluntary and $75 yearly dues gives you lake access, beach & boat ramp use. Land has 207 ft of frontage on East Washington Rd which is town maintained and paved. Town of Washington offers hiking in Pillsbury State Park, snowmobiling trails, ATV riding, hunting, ponds & lakes to fish from plus the quiet & serenity of a small rural NH town. Quaint village setting has a General Store that serves great breakfast & lunch. This lot has several hemlock trees that have to be over 100 yrs old.

A little slice of heaven awaits you in NH! Affordable lot for sale with lake access on Lake Ashuelot! Boat launch and Beach pictures attached. Four wheelers and side-by-sides are allowed on Association roads and are a fun way to get to and from the beach! Great fishing, swimming and boating! Enjoy outside activities and the picturesque town of Washington! Just up the road from Washington is Pillsbury State Park for additional places to hike, canoe and kayak! Summer is coming!

Come join this wonderful community and build your dream home. Lake Asheulot Estates offers tennis and basketball courts, beach house, club house,boat launch, community activities, play ground or just a peaceful place to build your next home. This lot is right around the corner from the boat launch and a few short streets away from the tennis and basketball courts. drastic reduction brings this lot to one of the best values in the community.

Great spot to build your year round or vacation home in beautiful Lake Ashuelot Estates! Amenities include beach, dock, boat ramp, basketball, tennis courts. There are a multitude of activities to do in the area including hiking, biking, fishing with easy access to ATV and snowmobile trails. Lot has had perc test done and expired septic approval available.

Nice level 1 acre Residential lot. Build your dream home or get away camp. Near trails for snowmobiling, and hiking. Don't let this one slip away!

Some of the work has been done for you.Lot has an expired 3 bedroom septic design and lot appears buildable. Lot is on a gradual slope ideal for walk out basement and faces Westerly (close to Lake). Mostly wooded this lot is an ideal building site. Minimal site costs as some work has been done. Lovely Lake Ashuelot Estates welcomes you for you to build your 1st or 2nd home. Restrictions on RVs and camping but ideal for permanent building 3 season home or full year round home. Miles of trails nearby and wonderful lake and boating amenities go with this lot, come check it out.

Land with beach access, might be just what you need for summer. Lake Asheulot Estates has lots to offer! .89 acres of wooded sloping hill, corner lot, with access to tennis courts, basketball courts, and boating. Many types of recreation in the area like golfing, snowmobiling, ATV's, hiking, fishing, biking, or just relaxing at the beach. Build your vacation or full time home here in Washington. Enjoyable country living at it's best.

High and dry wooded lot in Lake Ashuelot Estates. This wooded lot has a current 3 bedroom approved septic design. Possible water view with clearing. Come enjoy the beach, lake, basketball, tennis courts and the other amenities that are available with ownership. Great spot for your year round vacation home!

Listed by Johnna Brown of Regarding Real Estate LLC

Washington, NH- A beautiful corner lot with peek-a-boo views of the lovely lake Ashuelot. This lot would be a great spot to build your year round or vacation home in Lake Ashuelot Estates. Amenities include a beach, dock, boat ramp, as well as basketball and tennis courts. This area is great for the lover of outdoor activities! This area includes hiking and biking trail. There is easy access to ATV and snowmobile trails as well. Lake rights with the land allow for boating and fishing opportunities. Come turn this parcel into your sweet retreat!

Copyright 2020 New England Real Estate Network, Inc. All rights reserved. This information is deemed reliable, but not guaranteed. The data relating to real estate for sale on this web site comes in part from the IDX Program of NEREN. The information being provided is for consumers' personal, non-commercial use and may not be used for any purpose other than to identify prospective properties consumers may be interested in purchasing. Data last updated May 26, 2020.